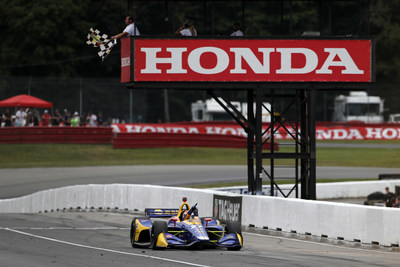 While several teams and drivers started today’s race looking to complete the 90-lap distance on just two fuel stops, all but Rossi were forced to switch to a three-stop strategy as the multiple fights for position intensified throughout the contest.  Rossi, however, was able to remain clear of most of the individual battles, enabling him to pull out a 12.8285-second victory over Robert Wickens at the checkers.  Rossi’s fourth career Indy car victory was also the third time he has won from the pole, with the others coming at Watkins Glen in 2017 and at the Grand Prix of Long Beach earlier this year.

Wickens caught and passed the Team Penske duo of Josef Newgarden and Will Power, as well as Ryan Hunter-Reay, to make it a 1-2 finish for Honda.  Dixon fought his way from ninth to fifth, and continues to be the man to beat for the 2018 Verizon IndyCar Series Championship; while Sebastien Bourdais once again thrilled with multiple passes to finish sixth after starting 24th and last due to a crash in qualifying.

Video recaps from this weekend’s Honda IndyCar Series activities at Mid-Ohio are available on the “Honda Racing/HPD” YouTube channel. Produced by the Carolinas Production Group, the video packages can be found at: https://www.youtube.com/HondaRacingHPDTV.

Alexander Rossi (Andretti Autosport Honda) Started first, finished first, second win of 2018 and fourth career Indy car victory: “It’s what we needed.  We said coming into this weekend that we had to execute for five weekends in a row. This is the start of that, hopefully.  It was great [pit stop] strategy. We knew we could two-stop if we committed early and that’s what we did.  We’re thinking about [the championship], but we’re also focused on just race wins. We’ll take a very well-deserved break before Pocono.  We’ve been strong there the last two years and just try to do [there] what we did today.”

Robert Wickens (Schmidt Peterson Motorsports Honda) Started fifth, finished second, fourth podium finish of 2018 and seventh top-five result: “We stuck to our guns, and I thought our [three pit stop] strategy worked well. The problem is, on my third stint, I just got stuck in a whole gaggle of [slower] cars. Unfortunately, they were on reds [Firestone softer compound, alternate tires] and I was on ‘blacks’ [more durable, but slightly slower, primary tires].  I couldn’t make it through, and just lost loads of time. I was probably losing about a second a lap for a good 10-15 laps. It’s unfortunate. Nevertheless, the Lucas Oil car went from fifth on the grid to finish second, so I can’t complain.”

Art St. Cyr (President, Honda Performance Development) on today’s Honda IndyCar Series win at Mid-Ohio: “It’s always fun to win your ‘home’ race.  It’s gratifying when you have both the fuel save and non-fuel save strategies covered, as we did today.  Alex [Rossi] showed amazing pace while saving fuel and, if not for getting hung up in the middle of the race, Robert [Wickens] would likely have been nipping at this heels at the end.  Congratulations to both teams for successfully executing very different approaches today.  With four races remaining, continuing to win is the way we’re going to win the [IndyCar Manufacturers’] Championship.”