LONG POND, Pennsylvania, Aug. 19, 2018 /PRNewswire-HISPANIC PR WIRE/ — Already a winner of one 500-mile race – the historic 100th running of the Indianapolis 500 in 2016 – Alexander Rossi added another “500” win to his IndyCar Series career total today with a dominating performance at the ABC Supply 500 at Pocono Raceway. 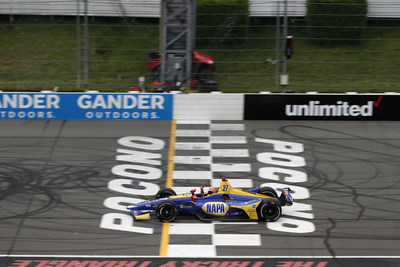 Starting third, Rossi moved to second on the opening lap, which was quickly waved yellow when Graham Rahal and Spencer Pigot made contact just after the green flag.  On the Lap 6 restart, Rossi took the lead as a fierce multi-car crash was triggered by contact between Robert Wickens and Ryan Hunter-Reay.  The initial impact sent Wickens up into the debris fence, and the cars of Takuma Sato, James Hinchcliffe and Pietro Fittipaldi also were caught up in the crash.  The accident resulted in a red flag, stopping the race for nearly two hours as course workers repaired the catch fence.

Dr. Geoffrey Billows, IndyCar Medical Director, confirmed that Wickens was awake and alert following the crash.  He was transported to Lehigh Valley Hospital – Cedar Crest in Allentown, Pa., for further evaluation.  The other four drivers involved in the wreck – Ryan Hunter-Reay, Takuma Sato, Pietro Fittipaldi and James Hinchcliffe – were evaluated and released from the infield care center.

When the green flag waved again, Rossi took control.  The Andretti Autosport driver led a total of 180 laps enroute to his third race win of the season, a total matched only by championship rivals Scott Dixon and Josef Newgarden.  He now trails Dixon by 29 points (530-501) with three races remaining.

For his part, Dixon quickly recovered from a poor qualifying result on Saturday to lead three laps and finish third, one of only four cars on the lead lap at the end of the contest.  Fellow Honda driver Sebastien Bourdais rounded out the top four finishers, and was the final car on the lead lap.

Video recaps from this weekend’s Honda IndyCar Series activities at Pocono are available on the “Honda Racing/HPD” YouTube channel. Produced by the Carolinas Production Group, the video packages can be found at: https://www.youtube.com/HondaRacingHPDTV.

The Verizon IndyCar Series now heads west for the final oval race of the 2018 season, the August 25 Bommarito Automotive Group 500 at Gateway Motorsports Park just outside of St. Louis, Missouri.

Alexander Rossi (Andretti Autosport Honda) Started third, finished first, third IndyCar Series win of 2018, fifth career victory: “The #27 NAPA Auto Parts Honda was better than everyone else, so it was an exceptional day.  I have amazing teammates.  Zach [Veach] and Marco [Andretti] really helped me out there in traffic.  You can’t do any of this without an amazing team, so I’m really fortunate to be at Andretti Autosport and be surrounded by this great group of people. But right now, our thoughts are with Rob [Wickens] and everyone involved in that crash.  It’s tough to really celebrate after something like that takes place.”

Scott Dixon (Chip Ganassi Racing Honda) Started 13th, finished second, continues to lead Verizon IndyCar Series Drivers’ Championship: “It was a very ‘tough day in the office’.  We tried to go off [pit] strategy, and got in that ‘fuel-save’ mode, so our pace was really slow and it was very difficult to pass anyone.  We got the most out of the PNC Bank Honda and did okay on [championship] points. Congrats to [Alexander] Rossi.  He’s driving fantastic at the moment, and we’re going to have to ‘slow his roll’ here pretty quickly!”

Marc Sours (Senior Manager and Chief Engineer, Honda Performance Development) on today’s Honda victory at Pocono Raceway: “Most important, Robert Wickens, his family and friends will remain in our thoughts as he recovers from his injuries.  Congratulations to Alexander Rossi, who was just so strong all day.  Everyone at Honda and HPD will be focused on equally supporting all of our drivers as the season winds down, and the championship battle intensifies.”