MIAMI, Aug. 29, 2019 /PRNewswire-HISPANIC PR WIRE/ — SOMOS DISTRIBUTION, the international content distribution company headed by Luis Villanueva and part of SOMOS Group, has licensed Súbete a mi Moto to Amazon Prime Video where the new series will be available to Prime Video customers in more than 200 countries and territories.  The series tells the story of one of the most popular Latino pop music bands and comes from producers SOMOS Productions, Endemol Shine Boomdog and Piñolywood Studios. 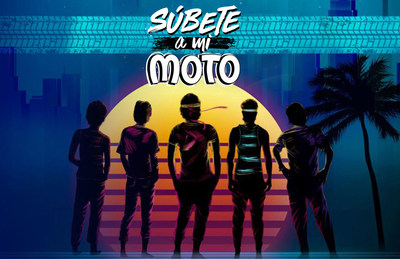 Súbete a mi Moto is the story about the Puerto Rican band of the 70s, Menudo. The plot narrates the unprecedented success of a band that launched figures such as Ricky Martin, Draco Rosa and others to stardom. The teenage group achieved significant international projection, led by Edgardo Diaz, creator of the concept. The band remained attractive and appealing to its audience by rotating its members when they reached the age of 16. The audience will enjoy the songs and will get to know details of a group that had millions of fans around the world. Súbete a mi Moto consists of 15 episodes of 60 minutes.

Luis Villanueva, President and CEO of SOMOS Distribution expressed his satisfaction with the deal: “The licensing of Súbete a mi Moto by Amazon Prime Video meets the expectations we had with the project. The story demonstrates its attractiveness and proves the trust that the market has in our distribution know-how and capacity as well as in the quality of the productions where SOMOS Productions and its partners participate. We are sure that this negotiation augurs a very beneficial relationship between SOMOS Distribution and Prime Video.”

“We couldn’t be more excited to bring the incredible story behind Súbete a mi Moto to our customers across Latin America and around the world,” said Pablo Iacoviello, Head of Content for Latin America, Prime Video.  “We continue to add a robust line-up of high-quality programs to the Prime Video catalog, and we know our customers are going to love this bio-musical series.”

Alejandro Rincon, CEO Endemol Shine Boomdog, added, “We are thrilled that Prime Video will be sharing this special series with their global audience. We’ve just started production and have assembled a tremendous cast and production team.  And we congratulate and thank our partners at Somos and Piñolywood.”

Carlos Nido, CEO of Piñolywood Studios , added, “The Series will present an amazing Puerto Rican story of one of the first boy bands assembled and how its manager made it a global sensation.  The group became a trailblazer in the music industry.  Excited that Prime Video will provide a global distribution platform for this Series that we are sure global audiences will enjoy watching.”

About SOMOS Distribution: SOMOS Distribution, LLC is a first class audio-visual worldwide programming distributor in all genres. Its business is built on the experience and deep knowledge of a multicultural sales and management team, with over 30 years of experience and strong industry ties. SOMOS Distribution, LLC has the human and technical resources, along with the facilities necessary to ensure the most efficient, productive, and comprehensive coverage of all territories worldwide. Our sales and distribution capabilities enable us to exploit the commercial potential of traditional channels such as broadcasters, cable and satellite transmitters, to pay-per-view and the growing internet and video-on-demand market, along with all other platforms that have redefined the growth of the industry. SOMOS Distribution LLC is characterized by its speed, dynamism and foresight in the market. For more information, visit somosdistribution.com

United Ways of California Helps Californians Count Down to July 15...