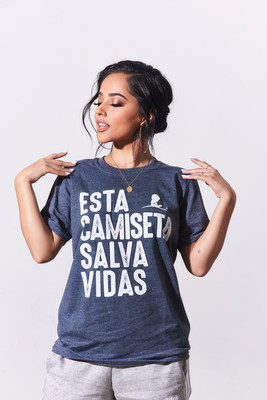 The Billboard Latin Power Players Summit, along with Billboard’s Latin American Music Awards held later this week, brings together a vast and vibrant group of young Latinx artists and musicians spanning several musical genres and reaching fans throughout the world.

“Grounded on the influence of the Latinx community in every aspect of American life, the shirt ‘Esta Camiseta Salva Vidas’ came as a natural integration to a viral movement embraced by St. Jude supporters throughout the entertainment community,” said Rick Shadyac, President and CEO for ALSAC, the fundraising and awareness organization for St. Jude Children’s Research Hospital. “We couldn’t be happier to launch our Spanish-language version of This Shirt Saves Lives among these creatively-driven and influential artists who are driving some of today’s biggest trends and changes in our society while reaching new global audiences.”

The This Shirt Saves Lives campaign has engaged more than 350 celebrity supporters and reached more than 1 billion people online. Each year, over 400,000 children worldwide will be afflicted by cancer and some of these young children hail from Latin American countries. Because of generous supporters, families never receive a bill from St. Jude for treatment, travel, housing or food – because all a family should worry about is helping their child live.

“I’m thrilled to launch this campaign for a mission that means so much to me,” said Becky G, who has two number one hits on the Billboard Latin Airplay Charts and one of Billboard’s “21 under 21.” “It’s cool to be part of a new cultural revolution that sees the power of music to impact – and save – lives directly. Whether you speak Spanish or not, this t-shirt is bridging a gap to help kids and families at St. Jude, and I can’t think of a better reason to be involved.”

About St. Jude Children’s Research Hospital®
St. Jude Children’s Research Hospital is leading the way the world understands, treats and defeats childhood cancer and other life-threatening diseases. Its purpose is clear: Finding cures. Saving children.® It is the only National Cancer Institute-designated Comprehensive Cancer Center devoted solely to children. Treatments invented at St. Jude have helped push the overall childhood cancer survival rate from 20 percent to more than 80 percent since the hospital opened more than 50 years ago. St. Jude won’t stop until no child dies from cancer. St. Jude freely shares the discoveries it makes, and every child saved at St. Jude means doctors and scientists worldwide can use that knowledge to save thousands more children. Families never receive a bill from St. Jude for treatment, travel, housing or food – because all a family should worry about is helping their child live. Join the St. Jude mission by visiting stjude.org, sharing stories and videos from St. Jude Inspire, liking St. Jude on Facebook, following St. Jude on Twitter and Instagram and subscribing to its YouTube channel.