Live broadcast of all 64 matches, including 56 games on Telemundo and eight on Universo 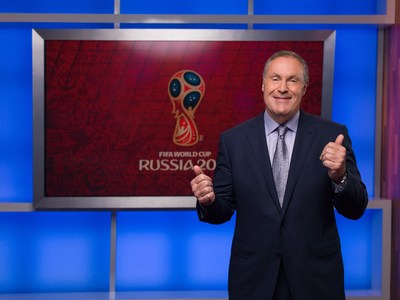 “We have been looking forward to Russia 2018 since 2011 when Telemundo, with the support of NBCUniversal, became the new Spanish-language home of the FIFA World Cup,” said Ray Warren, president of Telemundo Deportes. “As we approach the World Cup Draw this Friday and the World Cup Finals next June, we at Telemundo and NBCUniversal renew our commitment to deliver the highest quality, most consumed, and most talked about FIFA World Cup coverage in the event’s history.”

All 64 matches, in addition to the pre/post programming, will stream live via the Telemundo Deportes En Vivo app and TelemundoDeportes.com available on desktops, tablets, and connected TV’s — including Roku, Apple TV and Amazon Fire.

For the first time ever, a full-service virtual reality app will be available for the 2018 FIFA World Cup Russia™. The VR app enables fans to enjoy select content from a virtual VIP suite through a super wide angle feed, experiencing the best of both worlds: feeling like being at the stadium, while watching the high-quality TV signal. A wide variety of VR content produced for the 2018 FIFA World Cup Russia™ will be available in the VR app: 2D feeds, 180° views, 360° short-form video content and near-live multi-angle clips.

Telemundo will be covering all angles of the event with production sites across Russia’s most iconic locations. Red Square, Moscow’s historic plaza, will be the home of Telemundo Deportes’ programming, including the production of all the pre, post and halftime shows while Telemundo’s daytime programming will also originate from Moscow. In addition, Telemundo will have support studios at the World Cup International Broadcast Center and unique integrations from Telemundo Center, NBCUniversal Telemundo Enterprises’ new, state-of-the-art headquarters Miami, FL.

With the entire team of play-by-play commentators and expert analysts in Russia throughout the tournament, Telemundo Deportes will produce all 64 matches from Russia with commentators calling the action from the respective venues, for the vast majority of games. In addition, there will be dedicated crews following the teams with special emphasis on the most relevant teams for the Hispanic audience.

Telemundo Deportes’ award-winning team of on-air talent will be led by the internationally renowned commentator Andres Cantor.  A 4-time Emmy Award winner, recipient of the Sportscaster of the Year award from the American Sports Broadcasters Association, a Hispanic Heritage Award recipient, and author of “GOOOAL! A Celebration of Soccer.” This will be Cantor’s 10th World Cup and his 8th as a play-by-play announcer.  Cantor will be accompanied by a stellar group of talent, including National Emmy Award-nominee, Sammy Sadovnik, Miguel Gurwitz, Ana Jurka, Carlos Hermosillo, Karim Mendiburu, Copan Alvarez, Manuel Sol, among others. The team will also be joined by a group of diverse soccer personalities with an unmatched depth and breadth of expertise around all angles of the game, representing the most relevant countries participating in the World Cup.

Telemundo Deportes’ on-air team will be supplemented by the following renowned group of iconic soccer personalities, among others to be announced in the near future:

Carlos Hermosillo: Hermosillo is a Mexican soccer legend who has gone on to a successful career in television sports. He is part of the Telemundo Deportes’ on-air team and one of the top all-time goal scorers for the Mexican National Team and Cruz Azul.

Juan Pablo Sorín: Former Argentine player who participated in the 2002 and 2006 FIFA World Cups – and was captain of the team for the 2006 event. He also participated in two editions of Copa America and the 2005 FIFA Confederations Cup. Sorin also had a successful club career having played for renowned teams such as Barcelona, River Plate, Lazio and Paris Saint-Germain.

Claudio Borghi: After a stellar performance as guest analyst for Telemundo’s coverage of the FIFA Confederations Cup, the Chilean-Argentine manager and former soccer attacking midfielder returns to join the team for Russia 2018. Borghi is a World Cup champion having played alongside Maradona when the Argentina team won the 1986 FIFA World Cup. He also played for several clubs in Argentina and Chile and spent time in Italy with A.C. Milan. After retiring, Borghi has been coaching club teams in Argentina and Chile and served as head coach for the Chile National Team between 2011 and 2012.

Sebastián “El Loco” Abreu: Former Uruguayan striker who represented his country in the 2002 and 2010 FIFA World Cup and several Copa Americas (1997, 2007 and 2011.) He also played in a number of clubs throughout Uruguay, Argentina, Mexico and Brazil.

Manuel Sol: Sol is analyst commentator for Telemundo Deportes and a former Chivas and Mexican National Team midfielder star who became a household name for Mexican soccer fans during his 15-year soccer career. He made his professional debut with Pumas in 1992, then played with several league teams and as part of the Mexico National Team roster for the 1996 Summer Olympics in Atlanta, the 1998 Gold Cup and FIFA World Cup Qualifiers for the 1998 FIFA World Cup™.

Juan Pablo Ángel: Ángel is retired soccer star from Colombia who spent most of his career playing with popular clubs around the world including Premier League’s Aston Villa, Atletico Nacional, River Plate and Red Bulls. He was also part of Colombia’s National Team during the qualifiers for the 2002 and 2006 FIFA World Cup.

Horacio Elizondo: Former international football referee from Argentina who is best known for his officiation throughout the 2006 FIFA World Cup including the epic final where he gave Zidane a red card after he head-butted Materazzi in the chest following a verbal dispute.

During Telemundo and Universo’s exclusive broadcast of the Final FIFA World Cup Draw this Friday, December 1 at 9:30 a.m. ET, the network will unveil a new spot as part of the World Cup marketing campaign to be used through the kickoff of the tournament next year. The campaign reflects how soccer viewers live the World Cup together, aiming to create a cultural movement for Telemundo’s most unique, exciting, authentic World Cup coverage among all Hispanics across every platform, regardless of language, ever. The campaign will debut with a new promo to air across Telemundo, Universo and several NBCUniversal platforms.

In celebration of the Draw, Telemundo will also showcase the creation of an artwork mural, live at the iconic Wynwood Art District in Miami, FL. The mural will be crafted by the renowned Miami artist Lebo who’s known for his compelling visual work, and will feature the countries participating in the World Cup.  The artwork will be unveiled on December 1, following the Draw results.