Search
Home News Channels Entertainment Telemundo Did It Again! For The Third Consecutive Season The Network Is...
News provided by:
NBCUniversal Telemundo Enterprises

MIAMI, Sept. 10, 2019 /PRNewswire-HISPANIC PR WIRE/ — Telemundo makes history again.  For the third consecutive season, the Spanish-language network is on track to be the #1 Spanish-language network in weekday 8-11pm primetime among adults 18-49 (607,000) and adults 18-34 (251,000). Telemundo placed, once again, among the top five broadcast networks with NBC, ABC, CBS and Fox among adults 18-49 and adults 18-34.  The network is also trending to extend its lead to Monday–Sunday 8-11pm prime, excluding specials, while it continues to close the gap versus Univision in Total Day. Additionally, for the first time ever, this season Telemundo dominated as the #1 Hispanic network both in the weekday 9pm hour and 10pm hour. 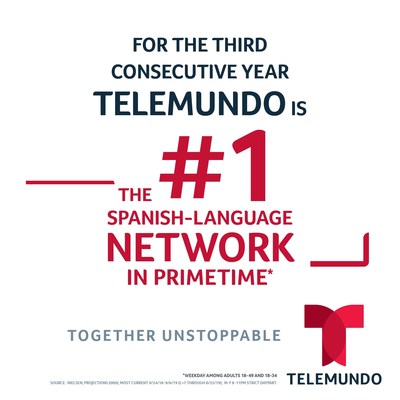 “For the third consecutive year, Telemundo has demonstrated it is the undisputed leader in prime time, across all platforms.  Our network continues to strengthen its connection with today’s Latinos by providing contemporary entertainment, sports and news content that clearly resonates with this rapidly growing market,” said Cesar Conde, Chairman NBCUniversal Telemundo Enterprises and NBCUniversal International Group. “We are thankful to our viewers for making us their preferred choice and look forward to continue offering them the premium content that has redefined the Hispanic media landscape for years to come.”

Telemundo’s programming is also leading in engagement across digital platforms.  Streaming on the Telemundo app has more than doubled (+130%) in the last year, driven by the success of “La Reina del Sur” and “Betty en NY.” For the past three years, the network reached the largest audience on YouTube among TV broadcast networks, regardless of language, and, for the last eight, has placed as the top Hispanic network on VOD.  Telemundo continues to drive the social conversation as the #1 most engaging TV broadcast network regardless of language speaking to the powerful fandom the company has built and its ability to tap into the cultural zeitgeist with its programming.

The network’s repeated success is driven by innovative programming that is not only setting a new standard, but most importantly representing today’s Latino. Telemundo’s programming has evolved alongside its audience reflecting their ever-changing media habits, diverse appetite and the type of content they prefer. The network’s business model, designed to produce original premium content for all platforms, positions Telemundo as the only network that offers content made specifically for and by U.S. Hispanics. Telemundo has been part of this evolving market and has demonstrated a unique understanding of what resonates and is relevant to this new audience, across all platforms, which has catapulted it to become the leading network in Hispanic media today.

Throughout the 2018-19 season Telemundo continued to innovate with its Super Series, shorter formats and “ripped from the headlines” original productions in primetime. The following programs led to the network’s unprecedented victory this season:

Additional Highlights for the 2018-19 Season include:

About NBCUniversal Telemundo Enterprises
NBCUniversal Telemundo Enterprises is a world-class media company leading the industry in the production and distribution of high-quality Spanish-language content to U.S. Hispanics and audiences around the world. This fast-growing multiplatform portfolio is comprised of the Telemundo Network and Station Group, Telemundo Deportes, Telemundo Global Studios, Universo, and a Revenue Strategy & Innovation unit. Telemundo Network features original Spanish-language entertainment, news and sports content reaching 94% of U.S. Hispanic TV households in 210 markets through 30 local stations, 50 affiliates and its national feed. Telemundo also owns WKAQ, a television station that serves viewers in Puerto Rico. Telemundo Deportes is the designated Spanish-language home of two of the world’s most popular sporting events: FIFA World Cup™ through 2026 and the Summer Olympic Games through 2032. Telemundo Global Studios is the company’s domestic and international scripted production unit including Telemundo Studios, Telemundo International Studios, Telemundo International, as well as all of the company’s co-production partnerships. As the #1 media company reaching Hispanics and millennials online, the Revenue Strategy & Innovation unit distributes original content across multiple platforms, maximizing its exclusive partnerships with properties such as BuzzFeed, Vox, and Snapchat. Through Telemundo Internacional, the largest U.S.-based distributor of Spanish-language content in the world; and Universo, the company reflects the diverse lifestyle, cultural experience and language of its expanding audience. NBCUniversal Telemundo Enterprises is a division of NBCUniversal, a subsidiary of Comcast Corporation.

Telemundo Did It Again! For The Third Consecutive Season The Network Is Set To Be The Undisputed Leader In Spanish-Language Weekday Prime