MIAMI, Nov. 2, 2020 /PRNewswire-HISPANIC PR WIRE/ — (Rose of Sharon Agency/Alma Entertainment) THE CUISINE WAR is Heating Up!! This Comedy Feature Film will be cooking up a storm about Food, Culture & Who’s Number One in the Kitchen. The Culinary World will never be the same! 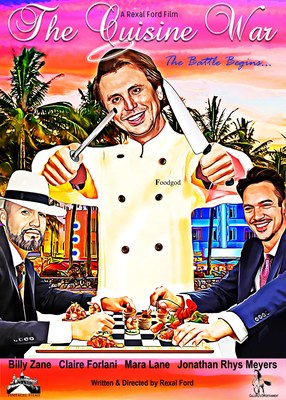 Let’s make some room for comedy during this Covid-19 pandemic. The world needs a little more cuisine and a lot more comical relief.

In the film, THE CUISINE WAR,  Jack’s critique has brought down elevated prestigious restaurants all throughout the world. When his newly appointed Editor; Isabella; (Mara Lane) hires Charlie (Jonathan Rhys Meyers), an “Undercover Food Critic”, Jack’s world is turned upside down.

Charlie and Jack are now competing against each other in the Culinary World on the Highest Level, Engaging in Tactical Warfare. This change to Jack’s peaceful life, starts a War!!

Jonathan Cheban “The Food God” is the Galloping Gourmet Guru who takes this adventure to other dimensions. His multi-faceted character intertwines with Jack’s daughter and creates havoc for Jack in many ways.

Arthur (Billy Zane) is Jack’s best friend and confidante in this epic battle for Culinary Domination and Claire Forlani, plays the role of Zoe, a renowned journalist and Isabella’s supportive friend on this Wild Ride.

The Filet Mignon could Never be Hotter or Juicier!