GEORGETOWN, Kentucky, April 10, 2017 /PRNewswire-HISPANIC PR WIRE/ — The future of automobile production is now. A $1.33 billion investment- the highest of any automaker in Kentucky and the second-largest in state history- will make Toyota Motor Manufacturing, Kentucky, Inc. (TMMK) the first plant in North America to begin producing vehicles using Toyota New Global Architecture (TNGA). Named the “Most American Made” car by Cars.com and the number one selling car in America for the past 15 years, the Camry, from the 2018 model year, will become the first Toyota vehicle made in the U.S. to fully incorporate the new vehicle development and production technology. “This $1.33 billion investment is part of Toyota’s plan to invest $10 billion dollars in the U.S. over the next five years, on top of the nearly $22 billion Toyota has invested in the U.S. over the past 60 years,” said Jim Lentz, CEO of Toyota Motor North America. “Toyota New Global Architecture is about exciting, ever-better vehicles for our customers as it will improve performance of all models, including increased fuel efficiency, more responsive handling, and a more stable, comfortable feel while driving.”

TNGA represents a completely new strategy to the way the company designs, engineers, and manufactures its vehicles. In addition, it will shorten the development cycle for vehicle improvements and new vehicles. TNGA retains all of Toyota’s traditional values of exceptional build quality and safety while injecting a fun driving experience with more responsive handling, regardless of the model. It also allows for a more flexible production environment, which will allow Toyota Kentucky to build ever-better cars, and respond quicker and more capably to customer demands down the road.

In addition to TNGA improvements, TMMK will undergo other makeovers that will, together, modernize and streamline the production process. That includes updating equipment and construction of an all-new paint shop.

“This is the largest investment in our plant’s history and it speaks directly to the quality of our people and our products, as well as the partnerships we’ve forged in the local community and across the state,” said Wil James, president, Toyota Motor Manufacturing, Kentucky, Inc. (TMMK). “This major overhaul will enable the plant to stay flexible and competitive, further cementing our presence in Kentucky.”

Toyota Kentucky is the automaker’s largest plant in the world, employing 8,200 team members. This represents an all-time high after recently adding over 700 people to support the upcoming launch of the 2018 Camry.  Last year, TMMK produced nearly a quarter of the total number of Toyota vehicles produced in North America – over 500,000. In total, the plant has produced more than one-third – 11 million – of all Toyota vehicles manufactured in North America since 1986.

Today’s announcement adds to the $530 million investment the plant committed to in 2013, in part to support Lexus production. This brings Toyota Kentucky’s investment in the last four years to approximately $1.86 billion.

“Toyota’s decision to invest $1.3 billion in their Kentucky plant is further evidence that manufacturers are now confident that the economic climate has greatly improved under my administration and echoes the recent National Association of Manufacturers’ 2017 Outlook Survey showing that 93% of manufacturers are now optimistic, which is an increase of 37% from just a few months ago.” – President Donald J. Trump

“Toyota is a global icon. This $1.33 billion investment is further proof of their commitment to producing American-made cars that are among the finest quality found anywhere in the world,” said Governor Matt Bevin. “It also serves as a testament to the hard work and dedication of the plant’s current employees, and reaffirms Toyota’s confidence in the advantages of manufacturing in Kentucky. We are grateful that this significant investment further validates the fact that Kentucky is the engineering and manufacturing hub of excellence in America.”

“Today’s announcement is welcome news for Kentucky’s economy and our workforce,” Senator Mitch McConnell said. “For more than 30 years, Toyota has been committed to the Commonwealth, and today’s investment is further proof that the company maintains its pledge to grow our economy and solidify Kentucky as a world-class automotive state. I want to congratulate the Toyota team, especially its thousands of hard-working Kentuckians.”

A recent study by the Center for Automotive Research shows Toyota Kentucky supports nearly 30,000 jobs across the state (direct, indirect, and spin-off). TMMK employees live in 80 Kentucky counties, and currently Toyota has more than 100 suppliers located across the Commonwealth.

“Toyota is a great asset to Kentucky and the decision to continue its commitment to Kentucky jobs by investing in the Georgetown plant is wonderful news for the Commonwealth and a reflection of its confidence in Kentucky as a prime location for business growth and innovation,” said Senator Rand Paul.  “I congratulate Toyota on this new initiative, and look forward to continuing my efforts in Congress to promote business-friendly policies to ensure Kentucky continues to reap the benefits of economic growth and expansion as a result of these types of investments.”

“This major investment further solidifies Toyota’s long-term commitment to its Kentucky plant,” said Secretary Terry Gill of the Kentucky Cabinet for Economic Development. “Its ripple effects will add to Toyota’s three decades of transformative impact on our communities and for our residents across the Commonwealth. Additionally, this strengthens Kentucky’s status as a top state for auto manufacturing.”

With the next chapter for the plant a bright one, Toyota is giving back to Scott County to help drive economic development efforts for the community. Three properties at Lanes Run Business Park, totaling nearly 22-acres, as well as $1 million for future land purchases, are being donated to further advance the vision for the area. Additionally, Toyota is committing $2 million over the next 10 years to Scott County United to go toward economic development initiatives that will benefit the community and region.

Toyota (NYSE:TM), creator of the Prius and the Mirai fuel cell vehicle, is committed to advancing mobility through our Toyota and Lexus brands.  Over the past 60 years, we’ve produced more than 33 million cars and trucks in North America, where we operate 14 manufacturing plants (10 in the U.S.) and directly employ more than 46,000 people (more than 36,000 in the U.S.).  Our 1,800 North American dealerships (nearly 1,500 in the U.S.) sold more than 2.7 million cars and trucks (2.45 million in the U.S.) in 2016 – and about 85 percent of all Toyota vehicles sold over the past 15 years are still on the road today.

Scott County United, a non-profit, was formed in 1985 to implement economic and industrial development in Georgetown–Scott County, Kentucky. Today it also acts as an issues forum for members of the board and the local community. 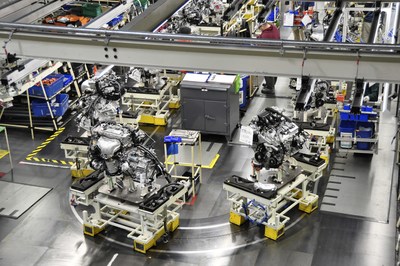 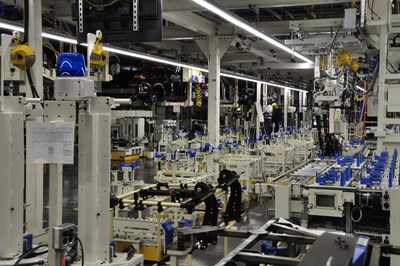 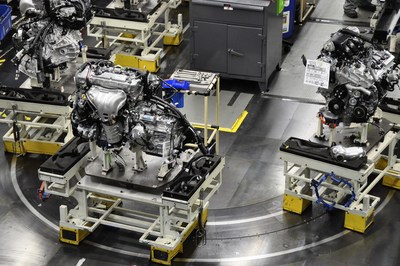