PLANO, Texas, Jan. 24, 2022 /PRNewswire-HISPANIC PR WIRE/ — The next generation of Toyota Tundra only went on sale last month, but already the demand for the all-new 2022 truck is strong. Just recently, the all-new luxurious Capstone grade was announced just a few months ahead of the on-sale date for the hybrid-powered Tundra models. With all the exciting truck news, Toyota is auctioning two of the first i-FORCE MAX Tundras at Barrett-Jackson in Scottsdale, Arizona, with all proceeds going to the Toyota U.S. Paralympic Fund, a first-of-its-kind program launched by the company in an effort to further support Team USA’s Paralympic athletes as they pursue their sport dreams. 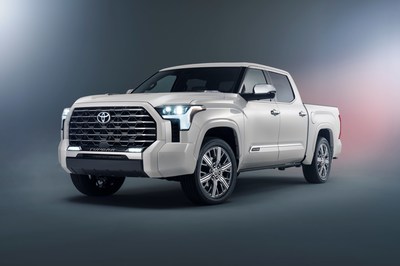 This coming weekend, Toyota will auction a Tundra Capstone with VIN 001 and a Toyota TRD Pro VIN 002. These will be two of the first i-FORCE MAX hybrid models assembled at Toyota Motor Manufacturing San Antonio.

“In celebration of 50 years of the world’s greatest collector car auctions, we are excited to bring two 2022 Toyota Tundras to this year’s Barrett-Jackson Auction 2022 Scottsdale,” said David Christ, group vice president and general manager, Toyota Division, Toyota Motor North America. “Given the anticipation for the best full-sized truck on the market (our all-new 2022 Toyota Tundra), we’re looking forward to two exciting auctions that will benefit the Toyota U.S. Paralympic Fund in hopes to continue to drive more awareness for all Paralympic athletes and the Paralympic Games.”

Two Special Tundras, One Special Cause
The all-new Tundra Capstone was just announced two weeks ago, and it serves as the flagship grade for the Tundra lineup. TRD Pro, of course, is no stranger to many and is really a legitimate, next-level off-road truck ready for the trails from the start.

The 2022 Tundra TRD Pro is built on a CrewMax 4×4. The auction, Lot #3005, will cross the world-famous Barrett-Jackson auction block on Friday, January 28, at approximately 6:30 p.m. MST. It will feature VIN 002 and will be one of the first two Toyota Tundra hybrid pickups to be sold in North America.

Offered only with Tundra’s new i-FORCE MAX 3.5-liter twin-turbo V6 hybrid powertrain and mounted to a new 10-speed automatic transmission, this full-size truck will produce 437 horsepower and 583 lb.-ft. of torque.

Of course, TRD Pro is equipped with features for when the going gets rough, so standard features include an electronically controller locking rear differential, Multi-Terrain Select (MTS) and Crawl Control (CRAWL), Fox off-road shocks and a 1.1-inch front suspension lift. TRD Pro comes with a new durable sheet-molded compound 5.5-foot bed, and it boasts a maximum towing capacity of 11,170 pounds.

On Saturday, January 29, the Toyota Tundra Capstone VIN 001 will cross the stage as Lot #3007 at approximately 4:30 p.m. MST. As the newest flagship of the Tundra lineup, Capstone is loaded with unique chrome accents, standard 22-inch chrome wheels, standard luxury-grade leather throughout the cabin, side acoustic glass for noise reduction, a large 14-inch multimedia touchscreen, 10-in. color heads-up-display, power steps, panoramic moonroof and much more. Like TRD Pro, Capstone is powered by the new hybrid i-FORCE MAX powertrain that produces 437 hp and a massive 583 lb.-ft. of torque!

“Supporting philanthropic initiatives is the very foundation of Barrett-Jackson,” said Craig Jackson, chairman and CEO of Barrett-Jackson. “Over our 50-year history, we have helped raise more than $135 million for many nonprofit organizations doing exceptional work in our communities, and we look forward to continuing these all-important efforts in Scottsdale with the auction of these new hybrid trucks from Toyota to benefit the Toyota U.S. Paralympic Fund.”

Those interested in being a part of the 50th anniversary celebration and registering to bid for the 2022 Scottsdale Auction, including the opportunity to bid on these charity vehicles, may do so here.*

*The auction-winning vehicles will not be immediately available and will be delivered in spring of 2022.

About Toyota
Toyota (NYSE:TM) has been a part of the cultural fabric in North America for more than 60 years, and is committed to advancing sustainable, next-generation mobility through our Toyota and Lexus brands plus our 1,800 dealerships.

Toyota has created a tremendous value chain and directly employs more than 47,000 in North America. The company has contributed world-class design, engineering, and assembly of more than 40 million cars and trucks at our 15 manufacturing plants, including our joint venture in Alabama that began production in 2021.

Through the Start Your Impossible campaign, Toyota highlights the way it partners with community, civic, academic, and governmental organizations to address our society’s most pressing mobility challenges. We believe that when people are free to move, anything is possible.

Note to Editors: Photography can be found on ToyotaNewsroom.com 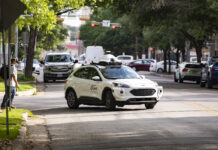 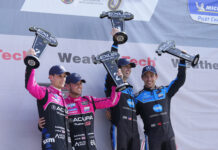