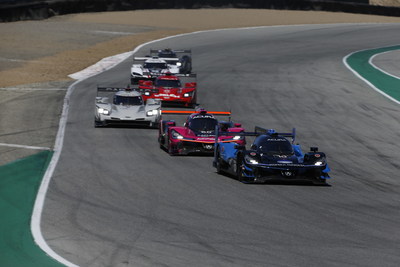 The #10 Acura ARX-05 prototype completed an issue-free race in the hands of Filipe Albuquerque and Ricky Taylor, leading 62 of 118 total laps, with the win extending the pair’s lead in the overall IMSA WeatherTech SportsCar Championship to 100 points over their nearest rivals.

Meyer Shank Racing completed a front-row-lockout for Acura yesterday, with Dane Cameron qualifying second in the #60 ARX-05. However, the team opted to follow an alternate strategy in today’s race and that decision, despite vaulting them to the lead for 53 laps of the event, left Cameron and co-driver Olivier Pla just shy of the podium in fourth place at the finish.

Acura NSX GT3 Evo
In the production-based GTD division, Magnus with Archangel’s John Potter and Andy Lally led the way for the manufacturer in their Acura NSX GT3 Evo after incidents befell the other two NSX GT3s in the race. Lally and Potter scored another top-ten finish, in ninth place.

HPD GT3 Academy graduate Jacob Abel’s IMSA debut was short lived after being collected by an out-of-control #27 on the opening lap of the event. Though the team tried to repair their #76 machine, it was unfortunately day done for Abel and co-driver Mario Farnbacher. Similarly, Gradient Racing’s pair of Till Bechtolsheimer and Marc Miller suffered multiple contacts with other cars, leaving the pair four laps down in 11th place.

Quote
Ricky Taylor (#10 Wayne Taylor Racing ARX-05) won from pole with co-driver Filipe Albuquerque: “Everybody before the weekend was saying ‘the Jaws music is playing, they’re under pressure now.’ But we felt like we were in control. We’ve had strong cars and the team’s been executing well, things haven’t quite been going our way. But we’re the only ones that knew it. Today, I was really proud of the team. They responded to the ‘Jaws music’ and the pressure by executing perfectly. The car was dominant. Everyone at HPD and Acura worked really hard between the races to give us the best possible engine control and power. The No. 10 Konica Minolta Acura ARX-05 boys changed the car from the traditional setup. We made lots of developments. The car was creative and well-thought-out, and it showed on track today. This is one of those wins that we have to remember and strive to repeat in the future.”

Andy Lally (#44 Magnus with Archangel NSX GT3 Evo) finished ninth: “Our Acura NSX was really good today! We kept our nose clean. John [Potter, co-driver] did an awesome job to start the race and keep it clean despite a pretty big accident right ahead of us. He made up more ground than almost any other driver during his stint, that was definitely the biggest positive for us today.”

Kelvin Fu (Director, Program Management, Honda Performance Development) on today’s win at Laguna Seca: “It was another great weekend at Laguna Seca for Acura. It’s great to win the race, and pole, for our third year in a row—massive congratulations for Wayne Taylor Racing for that victory. And, overall, it was a great day for HPD, taking the IndyCar victory as well at Portland with Alex Palou and Chip Ganassi Racing. It was unfortunate that two of our three Acura NSX GTD racers ultimately had their chances halted by contact, but we’re looking forward to going to Long Beach and hopefully we’ll get strong performances all-around at our home race.”

Next
The WeatherTech SportsCar Championship next travels to Long Beach, California for the Sept. 25 Acura Grand Prix of Long Beach.