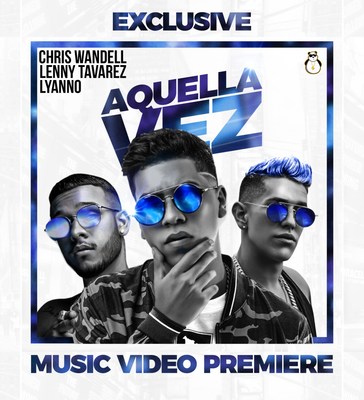 The music video was filmed in Dorado, Puerto Rico and was directed by John Coca. It highlights the explosive collaborations between these dynamic up-and-coming artists in the New Trap Wave stemming from Puerto Rico.

From an early age Chris Wandell was an avid music lover. He studied music composition with a focus in percussion at “Escuela Libre de Música de Hato Rey” where he met other talented young individuals who shared his passion. This lead to collaborations with noted Latin Urban artists such as Rafa Pabón, Lyanno and Almighty.

“I am extremely happy with all the positive feedback I’ve been getting and can’t wait to see what comes next. I hope you all enjoy this exclusive premiere on LaMusica App of my new video ‘Aquella Vez’,” stated Chris Wandell.

“We are thrilled to be able to premiere this dynamic music video on LaMusica. Chris Wandell, Lenny Tavarez & Lyanno are tremendously talented, and will surely do great things in the music industry in the upcoming months. Keep an eye out for them,” said Bianca Alarcón, VP of Digital Media Content at LaMusica App/SBS.

The single “Aquella Vez” will be available on December 14th, on all digital platforms.

Do not miss the exclusive premiere of the music video “Aquella Vez” this Thursday, December 13th, 2018 on LaMusica App, which is available for free via IOS and Android app stores. More information about the LaMusica App can be found at http://www.lamusica.com.