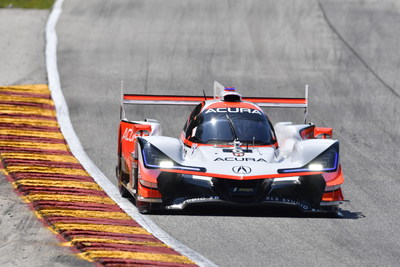 Acura Team Penske ARX-05
Cameron and co-driver Juan Pablo Montoya paced all three practice sessions prior to qualifying, and Cameron went to the top of the time charts in his first flying lap of the 15-minute session, remaining there for duration to take his first pole of the season, and the third of the year for Acura.

Teammate Helio Castroneves turned in a late-lap flyer to qualify second with a lap of 1:48.731, just 16 thousandths of a second off Cameron’s best lap time.  Cameron and Montoya currently hold a three-point lead in the IMSA WeatherTech SportsCar Championship drivers’ title chase, with Castroneves and Ricky Taylor ranked third.

Meyer Shank Racing Acura NSX GT3 Evo
In GTD, championship leader Trent Hindman took his MSR Acura to fifth in qualifying for Sunday’s two-hour, 40-minute contest.  Hindman and co-driver Mario Farnbacher lead the GTD Drivers’ Championship by 30 points after six of 10 rounds, with results including a class win at the Sahlen’s Six Hours of the Glen and three second-place finishes in the last four rounds.

Making her first appearance at the challenging Road America circuit, Bia Figueiredo will start eighth in the #57 MSR/Heinricher Racing Caterpillar NSX GT3 she shares with four-time Acura GTD race-winner Katherine Legge, as the pairing look for another strong result following their fourth-place finish at Watkins Glen.

Where to watch
Same-day television coverage from Road America begins at 7 p.m. EDT on Sunday, August 4, on the NBC Sports Network.  Complete, live race coverage also will be available on NBCSports.com  and the NBC Sports App with NBCSN authentication.

Quotes
Dane Cameron (#6 Acura Team Penske ARX-05) pole qualifier: “Super excited to be on pole!  We’ve led every single session so far this weekend so I’m really proud for everyone at Team Penske, Acura and HPD, and thankful for all their hard work to get us here.  We felt like we struggled here last year, so we put a lot of effort into getting better [at Road America].  Acura Team Penske qualifying 1-2 is a good statement to make and, hopefully, finishing 1-2 as well will seal the deal to [demonstrate] the improvement we’ve made from last year here to this weekend.”

Trent Hindman (#86 Meyer Shank Racing Acura NSX GT3 Evo) qualified fifth in GTD: “I really wanted to bring home a little bit better result for the team.  These guys were here so late last night trying to squeeze every last ounce of performance out of the #86 Acura NSX GT3.  It’s so competitive in GTD, we’re looking for hundredths [of a second] right now.  We’re in a great position for [the race] tomorrow, compared to our championship competitors.  We’re going to aggressive, and push for as many positions as we can.  But ultimately, we have to be smart in this scenario and know what needs to be done to leave here still leading the championship.”