NASHVILLE, Tennessee, May 24, 2018 /PRNewswire-HISPANIC PR WIRE/ — Renowned stylist, beauty and fashion expert, and TV personality Jomari Goyso bares his soul in his new book titled “Desnudo” (Naked)—an autobiography depicting his life, from humble beginnings on a farm in La Rioja, Spain, to his rise as one of the most influential voices of Hispanic television, and everything in between. 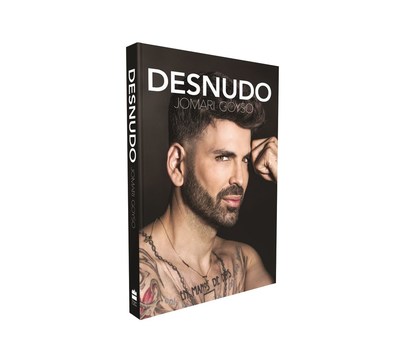 With strong opinions on celebrity fashion and a warm approach to his Hispanic audience, Jomari has captured the public’s attention—having collaborated with names such as Penelope Cruz, Salma Hayek, Kim Kardashian, sisters Kendall and Kylie Jenner, Morgan Freeman, Naomi Campbell, Kristen Bell, Kate del Castillo and a long list of other famous faces.

The autobiography is an exploration of fears and hang-ups that have accompanied Jomari on his journey and how he has overcome them. Jomari narrates with candor and transparency his life on the farm, his beloved grandmother Rosalia, and his father’s strong expectations of him and his future. He goes into painful detail on his struggles with his weight, bullying, low self-esteem, and even suicide attempts. The book also recounts his first days of independence in Madrid and the many “chapters” of his life—recognizing his talent and shaping his career to ultimately become a prominent figure among the Latino community in America.

Edward Benitez, Senior Acquisitions Editor for HarperCollins Español comments: “We are proud to be publishing Jomari’s autobiography—this is a story his fans have longed for and Jomari does not disappoint. From a humble beginning in a small town of 600 inhabitants in Spain to the glitz and glamour of Madrid, Hollywood, and Miami Beach, Jomari shares his journey like no one else can.

This is a story of transformation and healing, providing wisdom and inspiration for all readers.

Naked is the perfect title for this work—quite simply, he bares it all and hides nothing from his fans.”

The launch of Desnudo, reinforces Jomari’s passion and commitment to use his work to help people that suffer or have suffered from abuse. For this reason, a portion of the proceeds will be donated to a charitable institution focused on supporting women that suffer from abuse.

“We are delighted to announce the launch of Jomari Goyso’s first book, given the special connection he has with Univision’s audience,” said Rick Alessandri, executive vice president of Enterprise Development, Univision Communications Inc. “This autobiography is authentic, revealing and gives readers a never-before-told insight into his fascinating life.”

Naked becomes Jomari’s way of simultaneously revealing his inner-self while giving a voice to those who may also be suffering from low self-esteem and have not been able to make peace with their true selves.  To illustrate this point, Goyso speaks about the crucial moment when he decided to leave behind Josemari, the little boy from the farm, and become someone new, only to find himself again many years later under very different circumstances.

Jomari speaks of God and faith; of hard farewells and providential encounters; of the contradiction of being a stylist to the stars and having to sleep on a rooftop.  What Goyso truly undresses in this story is the crude reality of a lifestyle based on appearances—of which he became a victim—but more importantly, he bares his soul’s yearning to be appreciated and loved.  This is only one of several major revelations and insights that take place throughout the story.  Much of Jomari’s wisdom first becoming catalyzed by the duality of rubbing shoulders with the Hollywood elite while spending time with the less fortunate on the streets of Los Angeles.  It is from here that Jomari reveals the meaning of true beauty.

In addition to being a renowned stylist, make-up artist, and fashion expert that has collaborated with world-class designers, Jomari has gained notoriety for having worked with names such as Salma Hayek, Penelope Cruz, and Kim Kardashian.  He also has achieved a remarkable career in television, becoming a household name for his work on Univision as the resident fashionista; also known for his latest fashion and style segment on Univision Network’s variety show, “El Gordo y La Flaca” and his segment on “Primer Impacto” called “Jomari Love“, earning him a Daytime Emmy nomination.  His work has bee showcased in prestigious magazines such as Vogue, Cosmopolitan, Glamour, Marie Claire, Vanity Hola and InStyle, as well as on television galas such as The Oscars and The Golden Globes.  Jomari Goyso has become one of the most influential figures of Hispanic television in America.

HarperCollins Publishers is the second-largest consumer book publisher in the world.

Headquartered in New York, HarperCollins has publishing operations in 18 countries. With two hundred years of history and more than 120 branded imprints around the world, HarperCollins publishes approximately 10,000 new books every year in 17 languages, and has a print and digital catalog of more than 200,000 titles. Writing across dozens of genres, HarperCollins authors include winners of the Nobel Prize, the Pulitzer Prize, the National Book Award, the Newbery and Caldecott Medals, and the Man Booker Prize.

At HarperCollins Español, authors and their work are at the center of everything we do. We are proud to provide our authors with unprecedented editorial excellence, marketing reach, long-standing connections with booksellers, and industry-leading insight into reader and consumer behavior. Consistently at the forefront of innovation and technological advancement, HarperCollins Español also uses digital technology to create unique reading experiences and expand the reach of our authors. For more information, please visit www.harpercollinsespanol.com.