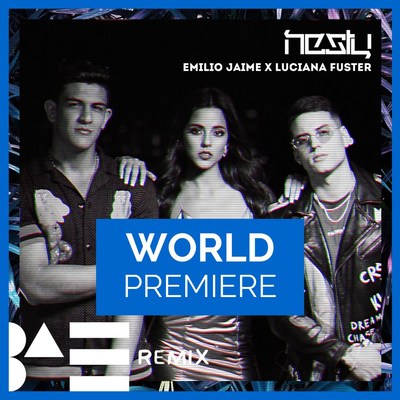 The video was filmed in Miami, FL and features the two male leads competing for the attention of the lovely Luciana, who is making her singing debut on B.A.E. Remix. Luciana more than holds her own, and it’s easy to see her eventually putting forth her own solo project. Her talent and beauty shines through, while Emilio Jaime continues to add credits to his career in music, having already recorded with the Puerto Rican group N’Klabe. Nesty, for his part, seems genuinely excited, even anxious, for his fans to hear his new music. The singer released his debut album, “Real Boy” in June 2017, under the Rottweilas label (led by Jaime Cosculluela and Alejandro Quintana). And with the incredible force with which Latin Music dominated the charts in 2018, it’s clear why he’s looking to make his statement in 2019.

LaMusica is proud to premiere Nesty’s latest project. We consider him to be one of the most promising young stars in the genre. Emilio Jaime and Luciana Fuster, meanwhile, have also taken a major step forward with B.A.E. Remix, proving to themselves, and now the world, that the new generation in Latin Pop Urban is here to seize the moment.

The music video for Nesty’s B.A.E. Remix featuring Emilio Jaime and Luciana Fuster can be seen exclusively on LaMusica (via its mobile app and/or website: www.lamusica.com) until Monday, February 4th, 2019. The music video will be made available on all other digital platforms on Tuesday, February 5th, 2019.

World premiere of music video “B.A.E. Remix” by Nesty in collaboration with Emilio Jaime and Luciana Fuster exclusively on LAMUSICA APP and LAMUSICA.COM