CHICAGO, June 10, 2019 /PRNewswire-HISPANIC PR WIRE/ — Valente Vargaz, originally from Mexico, was the third of six siblings and the only male in the family. He had a very difficult childhood because of his language problems and convulsions. During his time as a student, he always had good grades in the natural sciences, dance, handicrafts, social sciences, and history. His childhood dream has been writing books, but both his parents and his teachers did not believe in him. He served in the Armed Forces of his country, and he was a missionary in his church for two years. Then he was a policeman in Mexico, and after a few years, he emigrated to the USA where he performed different jobs. After being diagnosed with a cerebral and psychiatric illness, he was declared as disabled, and it was at this time that the author began to write with many difficulties, since he could only write on the computer using two fingers of the right hand and three fingers of the hand left, and even so he brings us a great job. 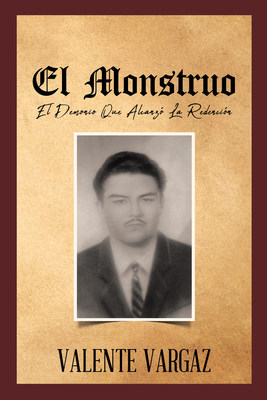 Valente Vargaz has completed his new book, “The Monster: the Demon Who Reached Redemption,” which shows the story of a man who suffered from a psychopathic dysfunction that endowed him with multiple skills, gifts, and talents but in turn, he developed a sadistic and obscure personality where other’s suffering was a pleasure to him. He used to be charming, but when he became angry, he became a madman.

The Monster was self-taught and struggled to excel physically, intellectually, and economically, even surpassing his psychopathy and gave a radical change to his life by knowing the doctrine of Jesus Christ, and following his example becoming a good man who dedicated his life to serve everyone around him and teach others to straighten out their lives.

Published by New York City-based Page Publishing, Valente Vargaz wonderful story “The Monster: the Demon Who Reached Redemption” is a story that exposes the harsh reality of those with mental illness and how the human being can overcome any obstacle if he follows the holy teachings of Jesus Christ.

Readers who wish to experience this shocking and deep work can purchase “The Monster, the demon that reached redemption” at bookstores everywhere, or online at the Apple iTunes store, Amazon, Google Play. or Barnes and Noble.

About Page Publishing:
Page Publishing is a traditional New York based full-service publishing house that handles all of the intricacies involved in publishing its authors’ books, including distribution in the world’s largest retail outlets and royalty generation. Page Publishing knows that authors need to be free to create not bogged down with complicated business issues like eBook conversion, establishing wholesale accounts, insurance, shipping, taxes and the like. Its roster of authors can leave behind these tedious, complex and time-consuming issues, and focus on their passion: writing and creating. Learn more at www.pagepublishing.com.

Valente Vargaz’s new book, “The Monster: The Demon Who Reached Redemption,” a powerful work, a book about redemption and overcoming life hardships