NEW YORK, Dec. 17, 2018 /PRNewswire-HISPANIC PR WIRE/ — Monday, December 10 was a historic day at the United Nations, as Gaby Natale, president of AGANAR Media, joined a group of decision makers for the international body’s first Hispanic Leadership Summit held at the UN Headquarters in New York. The unprecedented gathering of leaders from business, media, politics and advocacy came about after a yearlong effort by the We Are All Human Foundation, headed by Claudia Romo Edelman. 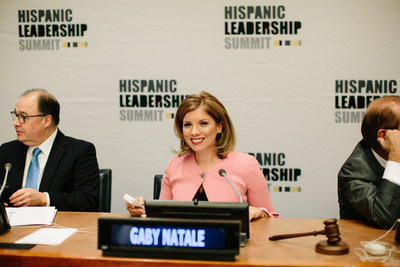 “The Latino community is the largest minority in the US, yet we remain chronically underrepresented and misrepresented in boardrooms, media narratives and public office. That is why the full backing of an institution as consequential as the United Nations is paramount in acknowledging this reality. This is the first step towards positive change”, said the triple Daytime EMMY winner shortly after her speech.

Invited to serve as special rapporteur on the topic of representation of Latinos in media, Natale had a talked-about unscripted moment when she offered her take on the need for Latinos to develop a “pioneer mentality”.

Her words: “I believe that for us to go from where we are to where we need to be as a community, we need to embrace a pioneer mentality. We need to take a leap of faith, step into the great unknown and dare to be first. That means to believe in ourselves, in our vision, even before we have the results to validate it… and share our story with the world (because) there is no greater narrative than the one written collectively by millions of souls who chose to be courageous”. Here is a link to the full speech by Gaby Natale https://www.youtube.com/watch?v=Dt-oev-vqzw

The summit focused on key findings from the Hispanic Sentiment Study, recently commissioned by Romo Edelman, one of the event’s organizers. The study shows America’s largest diverse community is feeling under-appreciated and less confident in the American Dream, as two-thirds of those surveyed say their vote as U.S. citizens does not count. “Unifying and organizing is an opportunity to realize the full potential of a community with $1.7 trillion of U.S. spending power,” Romo Edelman said. “Because if we fail, we risk losing the confidence of a Hispanic community that has long been a believer in the American Dream.”