NEW YORK, July 31, 2018 /PRNewswire-HISPANIC PR WIRE/ — Just two and a half weeks after giving birth, in-demand actress, businesswoman and philanthropist Eva Longoria opened the doors of her spectacular L.A. home to HOLA! USA. In our world exclusive, available to subscribers from August 2 and on newsstands from August 10, she introduces her adored firstborn son, Santiago Enrique, and the all of the details of his first days of life. 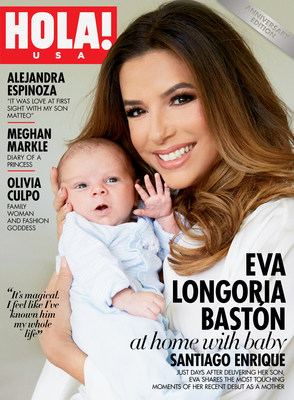 The little boy – whom she shares with her husband, media mogul Jose ‘Pepe’ Bastón – was born on July 19, giving new meaning to the life of one of Hollywood’s most powerful women.

In 13 pages full of gorgeous and tender photos, Eva tells us how she has organized her busy work schedule to keep up with her many projects – like her ABC TV series The Grand – and accommodate her new priority: motherhood.

The actress also reveals how her three stepchildren Natalia, Mariana and José have been involved from the very start with their little brother, including the important task of choosing his first name.

“In between taking stops to breastfeed her little one, (Eva) spoke to us about her pregnancy, how it feels to be a mother and what the future holds,” says HOLA! USA Editor-in-Chief Miguel Sirgado. “Also, with visible emotion, she shared how motherhood has impacted her social activism. All of this as she posed in front of the lens of talented photographer Bernado Doral, who made Eva’s return to work as stress-free as possible.”

Without a doubt, it’s the perfect way to celebrate HOLA! USA‘s second birthday, two years after Eva graced the cover of our inaugural issue. Back then she entrusted us with the exclusive details and photos of her and Pepe’s spectacular wedding which took place in Valle de Bravo, Mexico. Eva once again called on us to share details of her pregnancy, and now, we’re thrilled to publish the exclusive of her joy at becoming a first-time mother.

About ¡HOLA!
Founded in 1944, ¡HOLA! Magazine has become one of the world’s leaders in its field. Its long history publishing the best celebrity and royal photographs has made it an international icon for glamour, news accuracy and quality. The Spanish company HELLO! & ¡HOLA! Media, Inc. publishes 30 international editions in 10 languages across five continents. ¡HOLA! reaches 25 million readers worldwide, engages with 24 million unique monthly visitors, has over 13 million social media followers, and is seen by 21.5 million on its broadcast channel, ¡HOLA! TV.