MIAMI, Dec. 12, 2018 /PRNewswire-HISPANIC PR WIRE/ — For the second consecutive year, Telemundo, the preferred and leading media company serving Hispanics, is on track to end the broadcast year as the number one Spanish-language network in weekday primetime among adults 18-49 (681,000), according to Nielsen. In 2018, Telemundo continues to rank among the top five broadcast networks with NBC, ABC, CBS, and FOX, and outperform major English-language cable networks including TBS, TNT and MTV, including many others, among adults 18-49 in weekday prime. The network also had the highest composition of adults 18-34 out of total viewers, and lowest median age among all broadcast networks. Fueled by the success of its weekday prime-time line-up, Telemundo delivered in 2018 the highest share in its history, marking its sixth consecutive year of share growth among adults 18-49. 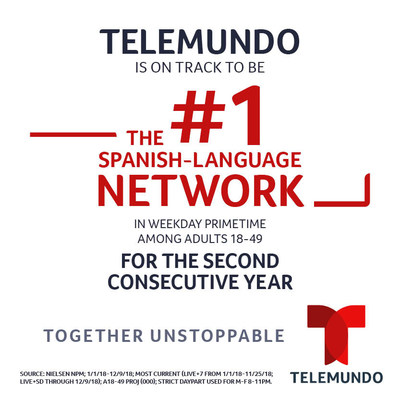 “Building on two consecutive seasons as the leading Hispanic network, we have solidified our position as the voice and choice of Latinos across all platforms,” said Cesar Conde, Chairman NBCUniversal Telemundo Enterprises and NBCUniversal International Group. “We are committed to invest in ground-breaking and innovative premium original content, as well as robust news coverage and world-class sporting events, specifically designed for the preferences and media consumption habits of Latinos living here in the U.S.”

Telemundo extended its lead across digital platforms consistently ranking as one of the top five TV networks on Instagram, according to Shareablee, regardless of language. Telemundo has over 115 million fans and followers across Facebook, Twitter, Instagram and YouTube, up 21% year-over-year. Telemundo’s YouTube channels generated 4.9 billion global video views, up 54% year-over-year, including 691 Million U.S. views, up 58% year over year.  Telemundo ranks as the #1 Hispanic TV Network on YouTube based on total subscribers and global views. The Telemundo Más app generated 105 million video views in 2018-to-date. In addition, for the eighth consecutive year, Telemundo has ranked as the #1 Hispanic VOD network and #1 in transactions for every month of 2018-to-date, according to comScore.

Highlights for the year-to-date include:

Key non-prime Telemundo properties are posting strong results in the last quarter of the year as they continue to close the gap with Univision:

About NBCUniversal Telemundo Enterprises
NBCUniversal Telemundo Enterprises is a world-class media company leading the industry in the production and distribution of high-quality, Spanish-language content to U.S. Hispanics and audiences around the world. This fast-growing multiplatform portfolio is comprised of the Telemundo Network and Station Group, Telemundo Deportes, Telemundo Global Studios, Universo, and a Digital Enterprises & Emerging Business unit. Telemundo Network features original Spanish-language entertainment, news and sports content reaching 94% of U.S. Hispanic TV households in 210 markets through 28 local stations, 51 affiliates and its national feed. Telemundo also owns WKAQ, a television station that serves viewers in Puerto Rico. Telemundo Deportes is the designated Spanish-language home of two of the world’s most popular sporting events: FIFA World Cup™ through 2026 and the Summer Olympic Games through 2032. Telemundo Global Studios is the company’s domestic and international scripted production unit including Telemundo Studios, Telemundo International Studios, Telemundo International, as well as all of the company’s co-production partnerships.  As the #1 media company reaching Hispanics and millennials online, the Digital Enterprises & Emerging Business unit distributes original content across multiple platforms, maximizing its exclusive partnerships with properties such as BuzzFeed, Vox and Snapchat. Through Telemundo Internacional, the largest U.S.-based distributor of Spanish-language content in the world and Universo, the fastest growing Hispanic entertainment cable network, the company reflects the diverse lifestyle, cultural experience and language of its expanding audience. NBCUniversal Telemundo Enterprises is a division of NBCUniversal, a subsidiary of Comcast Corporation.