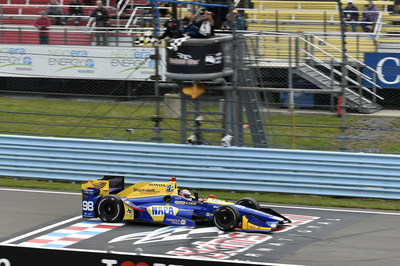 Starting from the pole, Rossi was the driver to beat throughout the 60-lap event, despite having to make an extra pit stop when he failed to receive a full load of fuel during his first scheduled service, due to an issue with his pit equipment.  In addition, the threat of rain and a pair of early-race caution flags led to a half-dozen cars going “off sequence” with their pit strategies, including the Chip Ganassi Racing Honda of Max Chilton.

Fortunately, the second caution enabled Rossi to close the gap to the leaders, and effectively took him off sequence, as well.  Once in the lead group, Rossi was both able to conserve fuel (running stints of 18 and 17 laps, respectively), and still led a race-high 32 laps.

For his part, Dixon was also strong throughout the Watkins Glen weekend, qualifying second and running down all of the off-sequence drivers to climb from seventh back to second in an impressive run from between Laps 34-40.  Dixon closed on leader Rossi in the final laps, but came up just one second short at the checkers.

But the runner-up finish moves the four-time series champion to within three points of leader Josef Newgarden with just the series finale at Sonoma Raceway – where double championship points will be awarded –  yet to run.

Of the leaders, Ryan Hunter-Reay and Graham Rahal made some of the biggest gains through the race. After starting seventh, Hunter-Reay finished third, his best result since a second place finish at the second Detroit race in June.  Rahal, meanwhile, finished fifth after starting 10th, his sixth top-five result of the season.

Rossi’s victory is the seventh of the season for Honda, from six different drivers and representing every Honda-powered IndyCar team.  Other winners include Takuma Sato at the Indianapolis 500; Dixon at Road America; Rahal, who swept both rounds of the Detroit double header race weekend; James Hinchcliffe at Long Beach; and Sebastien Bourdais at the season-opening St. Petersburg round.

Video recaps from this weekend’s Honda IndyCar Series action at Watkins Glen International Raceway, as well as Acura Motorsports activities from the Circuit of the Americas, are available on the “Honda Racing/HPD” YouTube channel. Produced by the Carolinas Production Group, the video packages can be found at: https://www.youtube.com/HondaRacingHPDTV.

Alexander Rossi (Andretti Autosport Honda) started 9th, finished 6th: “It was 12 qualifying laps at the end [in the run against Dixon to the finish], which is pretty cool. But I knew I had the car to do it.  Thanks to Andretti Autosport, thanks to Honda. The car was amazing. It was so fast from the start of the weekend. When we got into the race, we knew we had a car to win. We had an issue with the fuel hose [at his first scheduled pit stop], but it doesn’t matter, we were able to pull it off. I’ve been saying how good our cars are, how good this team is working, [but] we haven’t been able to prove it until today.”

Scott Dixon (Chip Ganassi Racing Honda) started 2nd, finished 2nd, closed to within three points of drivers’ championship with one race remaining: “It was definitely an exciting day.  I’m kind of shocked to end up as well as we did.  We had to pass a lot of cars; it was a lot of work today.  It was nice to have a run with Rossi at the end but we couldn’t get by him. It was fun to contend with Rossi there for the win. Big congrats to him and good to see Honda run strong at Watkins Glen. It’s definitely going to be close [for the championship] going into Sonoma.”

Art St. Cyr (President, Honda Performance Development) on today’s race victory: “What a great way to celebrate the continuation of our partnership with Andretti Autosport and Alexander Rossi.  Alexander had a fast car all weekend, and even his problem at the first pit stop was only a temporary setback.  Meanwhile, Scott Dixon overcame some issues of his own and now is effectively tied for championship lead, just three points back with more than 100 points on offer at Sonoma.  Congratulations to everyone at Andretti Autosport, and all our associates at HPD for their tireless efforts all season long.”