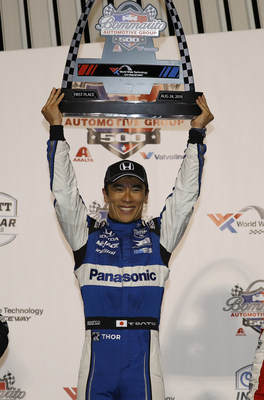 A total of five caution flags and high tire wear led to numerous pit strategies during the 248-lap NTT IndyCar Series contest, the final oval race of the season, with some teams attempting to complete the race on just three stops, while others used various four-stop strategies. Rahal Letterman Lanigan used a four-stop plan to perfection, with Sato emerging in the lead on Lap 188.  On slightly fresher tires, Carpenter closed the gap to the leader during the final 24-lap run to the checkers, but Sato held on for a narrow, 0.0399-second victory.

For Sato, tonight’s win is his second of the year, following a road course victory at the Honda Indy Grand Prix of Alabama in April, and his fifth career IndyCar Series win, which includes the 2017 Indianapolis 500.

The award for the most entertaining drive of the night, however, went to rookie Santino Ferrucci, who led a race-high 97 laps in his Dale Coyne Racing Honda and battled former series champions Tony Kanaan and Josef Newgarden for third in the closing laps. His fourth-place finish equals his best previous efforts this year from Pocono Raceway and Texas Motor Speedway.

Championship contender Alexander Rossi had a fast Honda throughout the race, but was one of the drivers caught out by pit strategy and ill-timed caution flags, relegating him to a disappointing 13th-place finish, one lap down to the leaders.

Defending series champion Scott Dixon’s hopes of a repeat title also took a hit tonight when debris penetrated his radiator on the opening lap. The resulting coolant leak forced Dixon’s Chip Ganassi Racing team to take the car behind the wall for extended repairs. He returned to the track near the midpoint of the 248-lap race and finished 20th, ending a streak of four consecutive first or second-place finishes.

Next
The NTT IndyCar Series continues its stretch run to the finish of the 2019 season and heads to the Pacific Northwest for next weekend’s penultimate race, and the September 1 Grand Prix of Portland at Portland International Raceway.

Quotes
Takuma Sato (Rahal Letterman Lanigan Racing Honda) Started fifth, finished first, second IndyCar win of 2019, fifth career victory: “For sure, we were a little lucky in terms of strategy, but we were fast all night. It was tough, I lost momentum [and multiple positions] twice tonight in traffic, but we made it happen tonight.  Big thank you to the Rahal Letterman Lanigan team, it’s an incredible team. I think our most important run was the one before our [second-to-last] pit stop. We were able to run at a very high pace throughout that run, and that kept us on the lead lap when we made our [final] stop. That was a very significant moment for us tonight.”

Santino Ferrucci (Dale Coyne Racing Honda) Started sixth, led 97 laps and finished fourth, equaling his season-best finishes from Pocono Raceway and Texas Motor Speedway: “We had a strong race car all night. We were able to run out front all night and, quite frankly, our race car was good enough to win this thing. At the end, I was really trying to get ‘TK’ [Tony Kanaan, for third place], but I nearly lost the car and got up in the ‘marbles’ and I did what I had to do to save the car. It was tough having to save fuel at the end [to make the finish], but all-in-all, I’m pretty happy to come home with another top-five finish.”

Steve Eriksen (Vice President and COO, Honda Performance Development) on tonight’s race, Honda’s seventh IndyCar Series race win of 2019: “It was great redemption for Takuma [Sato] following the challenges of last week, and a thrilling drive by Santino which kept us all on the edge of our seats. It’s great to add an oval track victory to our total for the season. Congratulations to our partner teams, and all the HPD associates who worked so hard to get us back to Victory Lane.”