BERLIN, Sept. 23, 2019 /PRNewswire-HISPANIC PR WIRE/ — A new report from Transparency International reveals that more than half of all citizens in 18 Latin American and Caribbean countries think corruption is getting worse in their country and governments aren’t doing enough to tackle it. Corruption is a major concern for ordinary people; 85 per cent of those surveyed believe government corruption is “a big problem”. 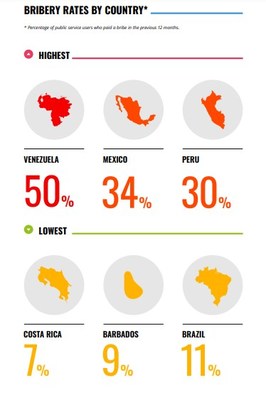 The report, entitled, Global Corruption Barometer (GCB) — Latin America and the Caribbean, for the first time shows one in five people experiences sexual extortion when accessing a government service, like health care or education, or knows someone who has.

Data also shows that 71 per cent of people think that sextortion happens at least occasionally.

Equally troubling, one in four people was offered a bribe in exchange for votes at national, regional or local elections in the past five years. In a damning indictment of low trust in government, 65 per cent think their government is run by and for a few private interests.

These alarming statistics underscore the disproportionate effect that corruption has on women, and suggests a significant lack of political integrity among government leaders. The office of the President and Prime Minister, as well as Members of Parliament, are seen as the most corrupt group or institution by 53 and 52 per cent of people respectively.

“Too often, presidents, parliamentarians and other political leaders act in their own self-interest, at the expense of the citizens they serve,” said Delia Ferreira Rubio, Chair of Transparency International. “In a region where anti-corruption efforts are building momentum despite recent setbacks, citizens continue to demand more and better from their governments.”

People’s actual experience with bribery is similarly concerning. More than one in five people who access public services, have to pay a bribe. This is equivalent to approximately 56 million citizens.

Across the region, police earn the highest bribery rate (24 per cent), while other services like utilities, including electricity and water, are close behind (19 per cent).

Despite these challenges, an overwhelming majority of people remain hopeful. Seventy-seven per cent believe ordinary citizens can make a difference in the fight against corruption.

“Citizens have the right to report corruption and expect that politicians act with integrity,” said Patricia Moreira, Managing Director of Transparency International. “Corruption eats away at society and undermines institutions. Political leaders need to listen to the clear demands of citizens to tackle corruption and strengthen democracy.”

For more information, including a full list of recommendations, go to: anticorru.pt/gcb2019lac

About the Global Corruption Barometer
The GCB is the largest, most detailed survey of citizens’ views on corruption and their experiences of bribery in Latin American and the Caribbean. Between January and March 2019, the GCB surveyed more than 17,000 citizens in 18 countries across the region. The surveys were conducted by Ipsos in 13 Latin American countries, Market Research Insights in 4 Caribbean countries and by Public Domain Limited in the Bahamas. For more details on the methodology, a full list of countries surveyed and information on the survey approach, please see here.

One in five people in Latin America and the Caribbean experiences sexual extortion, or knows someone who has, survey says