DURHAM, N.C., May 11, 2022 /PRNewswire-HISPANIC PR WIRE/ — As it becomes more important than ever before for young women of all backgrounds to have a strong female role model to look up to, Aza Comics announced today that it is expanding its novel series of multicultural female superhero stories into Latin America. 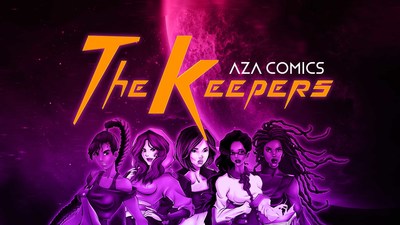 Created by serial entrepreneur Jazmin Truesdale, Aza Comics meets the demand for superheroes that better reflect today’s evolving society and celebrate the various communities and individuals that make up the world as we know it, no matter the age, gender, ethnicity, religion, or sexual orientation. The fast-growing brand is known for its team of multicultural female superheroes called The Keepers and through engaging storytelling and action-packed illustrations, each story brings the Aza Comics superhero universe to life with the hope of inspiring women and girls from all over.

Due to the growing popularity of its Latina superheroines, Aza Comics is now expanding its team of multicultural female superheroes to Latin America. The newly released versions of “The Keepers: Origins” & “Can You Keep a Secret?” is now available to the Spanish and Portuguese-speaking communities on Amazon and the Aza Comics Shop, in addition to a range of other books and merchandise.

“It’s one thing to tell a girl that she can be whatever she wants; it’s another thing to show her what that looks like. Representation is so important to me, which is why I created these characters so that every woman and girl could see herself as powerful and capable,” said Truesdale. “Since our inception, we have received enormous support from the Latinx communities, and we are so excited to be able to share our stories and our characters with our growing audience throughout Latin America.”

Creator and writer Jazmin Truesdale is available for interviews.

About Aza Comics
Aza Comics is a superhero brand based in Durham, North Carolina founded by serial entrepreneur and author Jazmin Truesdale. The company is known for its multicultural female superheroes and philanthropic initiatives that have been featured in Vogue, TIME, USA Today, and various other national and international publications.

DONALD J. TRUMP IN AN EXCLUSIVE INTERVIEW WITH TOMÁS REGALADO FOR MEGA TV