MIAMI, March 21, 2019 /PRNewswire-HISPANIC PR WIRE/ — Recent release “The Russian Hybrid War Over the West” written by Hugo San Martin, is a scientific book that brings us the broad explanation about a new type of war against the West, as it is “War Hybrid. “ 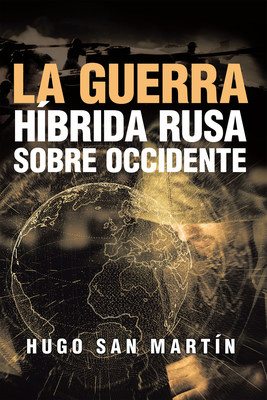 Hugo San Martin was born in Bolivia. He is a lawyer, with a Master’s degree in Strategic Studies and International Security from the University of Granada (Spain) and another Master’s Degree in Political Science from the Latin American Faculty of Social Sciences (Costa Rica). In his country he has occupied the functions of Minister of Government, Minister of Labor and Deputy. He is the author of numerous articles and several books. As a lecturer on issues of Security, Governance, Prospective and Populism, he has been invited to different universities in Latin America and academic centers in the US and Spain.

Hugo San Martin brings us an impeccable work where he clarifies any doubt about this new global threat: “During the last years, the concept of ‘Hybrid War’ has become a reason for analysis in military and political instances. The discussion of the notion has been undermined by the conceptual vagueness, this is due to the fact that, throughout history, especially after many periods of peace, it has always been difficult for contemporaries to identify changes in nature, type and character of the war. From the poles, arrows, swords, cannons, submarines, planes, tanks, drones we have gone to cybernetics as a weapon. The Hybrid War configures the new type of military conflict predominant in the world. It is about the aggression generated by a combination of irregular forces, regular covert forces and, mainly, the cyber attack based on the implementation of propaganda campaigns, information, and disinformation on a large scale, through the use of cyber attacks and interference in communications systems. It is a war in peacetime, as was the Cold War, but, unlike it, Western populations are not aware of their condition of existential threat. The understanding of this phenomenon requires a rigorous and scientific study. That is what makes this book of great relevance “

Hugo San Martin offers an explanation of the conceptual debates and analyzes in detail concrete situations, such as: The Trump Election in the USA; the independence of Catalonia in Spain; the defeat of Matteo Renzi in Italy; cyber-espionage in Germany and economic support for the National Front of Marine Le Pen in France.

Published by Page Publishing, based in New York City, the work of Hugo San Martin “The Russian Hybrid War On The West” gives us a clear and methodical vision of what this global phenomenon means as it is the “Hybrid War” “

For readers who wish to venture into this intriguing and controversial topic, they can do so, through reading this wonderful book, and can purchase “The Russian Hybrid War Over the West” at any book store, or online stores and Apple iTunes, Amazon, Google Play or Barnes and Noble.

Hugo San Martin’s new book, “The Russian Hybrid War Over the West” is a work that reveals the meaning and functioning of the “Hybrid War”